After many weeks of rehearsing, Friday 12th May dawned. Several of our members took part in a local community event, ”I Love a Lassie”. This variety show was to commemorate the centenary of the death of Sir Harry Lauder’s son, Captain John C. Lauder, who, like so many of his generation, was killed in WW1.

In front of a full house in Strachur Memorial Hall, tutor Mairi Voinot 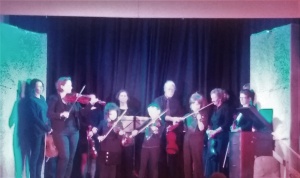 and three of our junior fiddlers entertained the audience with a lively set of tunes. The adult beginner group, who started classes eight months ago, followed and were amazing! They played a set of four Gaelic tunes. These two groups received loud applause from the audience. Finally, with the able assistance of   Jean-Ann Calendar, the mixed ability group played ‘’The Lauder Medley’’ (arranged by Jean-Ann). Well done to all who took part, thank you for supporting your workshop and helping to raise the profile of LFW.

A special thanks to Alison Diamond who played harmony throughout the medley and to Alison Duncan who prepared the entire script for the show and acted as narrator throughout.

Many of us didn’t get to see the entire show but here is a report from a member of the audience (my husband!)

On 12th May the Lauder variety show “I Love a Lassie” played to a packed house at Strachur Memorial Hall, marking the centenary of the death of Sir Harry Lauder’s son Capt. John C. Lauder who, like millions across Europe, perished in the 1914-18 war. Sir Harry’s grief led to his ‘hit’ songs such as “Keep right on to the end of the road”; a responsive audience sang along with feeling. The show involved all ages from impressive children’s charcoal drawings of Sir Harry to singing from the Strachur Hub (an initiative for community well-being).

The programme included a witty, ironic silent film called “I Love a Lassie” (circa 1920) set in Glenbranter, to which Sir Harry had strong emotional ties. In the film, he ran away from a sharp-horned bullock, leaving his beloved to her fate, and so losing her to another suitor and pushing him to emigrate. His romantic idealism in songs like “Roamin in the Gloamin” sits alongside his delight in such unheroic comic realism.

The local Youth Drama group staged an enactment of trench warfare, sound and light effects evoking the sky-splitting din and flash of constant shelling. The wounded and dying were tended with due military formality but also with the compassion of companions in arms. One brilliant touch was that the characters were played mutely by children, so placing the war at a remove from ordinary reality and unifying both the audience in sympathy and the entire show.

All agreed that the evening was a great success. Thanks to the sponsors Friends of Loch Lomond and the Trossachs (FOLLAT), and for fine music from the ColGlen Chorus,Lochgoilhead Fiddle Workshop at Strachur, Strachur Hub, pianist Philip Norris, and young pipers Rebecca Paterson and Jamie Campbell. Also for outstanding display boards by the local History Society, to singers Alec Pollock, Jimmy MacWilliams (who travelled from Sheffield), and to Sam Smillie. Finally, to Strachur Primary School, Alison Duncan, Fiona Campbell, Graham Thomas, Gordon Neish, and Sheena Dowse; and to Evie Campbell for co-ordinating the show.

Get our Tune Book

We use cookies on our website to give you the most relevant experience by remembering your preferences and repeat visits. By clicking “Accept All”, you consent to the use of ALL the cookies. However, you may visit "Cookie Settings" to provide a controlled consent.
Cookie SettingsAccept All
Manage consent

This website uses cookies to improve your experience while you navigate through the website. Out of these, the cookies that are categorized as necessary are stored on your browser as they are essential for the working of basic functionalities of the website. We also use third-party cookies that help us analyze and understand how you use this website. These cookies will be stored in your browser only with your consent. You also have the option to opt-out of these cookies. But opting out of some of these cookies may affect your browsing experience.
Necessary Always Enabled
Necessary cookies are absolutely essential for the website to function properly. These cookies ensure basic functionalities and security features of the website, anonymously.
Functional
Functional cookies help to perform certain functionalities like sharing the content of the website on social media platforms, collect feedbacks, and other third-party features.
Performance
Performance cookies are used to understand and analyze the key performance indexes of the website which helps in delivering a better user experience for the visitors.
Analytics
Analytical cookies are used to understand how visitors interact with the website. These cookies help provide information on metrics the number of visitors, bounce rate, traffic source, etc.
Advertisement
Advertisement cookies are used to provide visitors with relevant ads and marketing campaigns. These cookies track visitors across websites and collect information to provide customized ads.
Others
Other uncategorized cookies are those that are being analyzed and have not been classified into a category as yet.
SAVE & ACCEPT